TVs these days have massively upgraded their screens, thanks to more vibrant iterations of OLEDs.

Not to mention that they have also become smarter than ever. The latest offerings include apps like Netflix and virtual assistants, such as the aptly named Google Assistant, which makes navigation much easier.

While the speakers in these excessively thin screens are adequate for YouTube viewing sessions, the same can’t be said for watching blockbuster movies, at least on most TVs these days.

So if you think your home entertainment setup still falls short of the immersive experience you might want to achieve, here’s an affordable way to upgrade it.

While giant retailer Amazon is home to countless soundbars, one stands out among the rest due to its cheap prices.

Most high-end TV soundbars should cost upwards of a hundred bucks, but the majority Bowfell doesn’t even exceed $50.

Did we even mention that it sits at the top of the bestseller list on Amazon? It is certainly unrivaled in the soundbar category in terms of popularity.

(Photo: Amazon Majority Bowfell Small Sound Bar for TV)
Amazon’s best-selling TV soundbar, Majority Bowfell, fetches an extremely cheap price! Is it even worth getting it?

According to an MSN report, the top-selling TV soundbar on Amazon has top-notch reviews, ranging from four to five ratings from thousands of users.

Majority Bowfell soundbar: is it worth it?

However, the ratings alone aren’t enough to say whether this soundbar is even worth buying. But it certainly suggests that its users love it.

So, without further ado, let’s dive into its specs.

According to Yahoo Entertainment, the Majority Bowfell TV soundbar is small enough to fit inside your home entertainment console. It is only 15 inches wide.

But don’t be fooled by its size. It is equipped with a subwoofer to bring thrilling bass. It also delivers up to 50 watts of power.

It might not be the loudest soundbar on the market, but it delivers what Yahoo describes as “crystalline dialogue”. 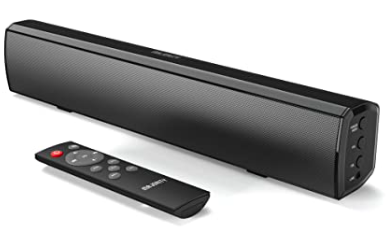 (Photo: screenshot from Amazon Majority Bowfell Small Sound Bar for TV)
Amazon’s best-selling TV soundbar, Majority Bowfell, fetches an extremely cheap price! Is it even worth getting it?

Moreover, it is not just limited to watching movies, thanks to its three modes, such as dialogue, movies and music.

Read also : Sonos smart speakers, soundbars Get discounts in a rare sale! Up to $180 off?

The Majority Bowfell soundbar, an Amazon bestseller, is now selling for the discounted price of $39.95. That’s $5 less than its original affordable retail price of $44.95.

This article belongs to Tech Times

ⓒ 2021 TECHTIMES.com All rights reserved. Do not reproduce without permission.