Editor’s note: This interview was done before Oleksandr Usyk reclaimed the top spot in The Ring’s pound-for-pound rankings.

Read the first part of this KO Magazine-style Q&A here.

Inoue (23-0, 20 KOs), currently No. 2 in The Ring’s pound-for-pound rankings, discussed moving up to the junior featherweight division, a future matchup with WBO/WBC 122-pound titleholder Stephen Fulton, facing (and training with) African American fighters, telling stories about standout featherweight Leigh Wood, his streaming deal with Amazon Prime, and how long he wants to keep boxing.

On the possibility of facing Fulton, The Ring’s No. 1 junior featherweight, Inoue said:

RingTV (RTV): Weight-wise, you said junior featherweight is probably the best fit for you right now. Do you feel like losing weight?

Naoya Inoue (NI): I’ve been feeling it for a while now. At 122 pounds, I can move more and I think I can demonstrate my strength more. However, it’s just that I can move better (and be more active). I don’t know how much damage I can do to opponents who should be naturally bigger. It will be an unknown world.

RTV: In the past, you have demonstrated power that seemed to be more dominant when you moved up to the 115 and 118 pound divisions. What do you think was the reason? 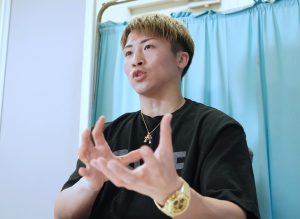 Inoue, who turned pro at 108 pounds, admits losing too much weight in past fights. Photo by Naoki Fukuda

NEITHER: Of course, I didn’t have to lose that much weight and that was huge. It may be that Japanese boxers, myself included, generally lose too much weight (fighting in abnormally light weight classes), so as we move up the weight class, our power increases. I also feel like if I go up to 122, my power will increase even more and I can hit harder. Featherweight is probably my limit, (at that weight) my body will be heavy, so my speed will drop.

RTV: What is your impression of the two 122-pound champions – Murodjon Akhmadaliev and Stephen Fulton? Which one is likely to be your target when you go up?

NEITHER: I haven’t watched Akhmadaliev much yet, only a few clips here and there. He has solid technique and is a strong fighter. I see he had a tremendous amateur career supported by the Uzbek system.

NEITHER: I watched the Fulton-Brandon Figueroa fight. Fulton is a technical fighter. He can keep his distance very well. I only watched one of his fights and I don’t think the Figueroa fight was his best so I’d rather not say much more. If we fight, I think it will be a great technical battle. It won’t be an easy fight. Fulton has long range, and I think it’s about how (well I close) the distance.

RTV: You have never faced a black American fighter in your pro career. Did you have fights with them?

NEITHER: I haven’t fought with black fighters yet either. This is also an unknown area for me. Black athletes tend to be physically strong. I would love to fight them and feel their athleticism.

RTV: Was there a fighter you thought was really good or strong?

NEITHER: I don’t think there is anyone who has impressed me so much throughout a fight. The first round against Emmanuel Rodriguez in Glasgow, I was like ‘Wow (this guy is good)’. From the first round to the 12th round, the only fight where I really struggled was the first one against Donaire, but that was more of an eye injury.

RTV: Again the same question, but including the fighters you faced in sparring sessions and amateur fights? 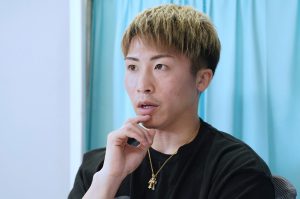 The toughest sparring partner Inoue could think of is Ring’s No. 6 featherweight Leigh Wood. Photo by Naoki Fukuda

NEITHER: Nothing in particular comes to mind, but Leigh Wood, the current WBA featherweight titleholder who I fought with before the Jamie McDonnell fight, had tremendous punching power. The wood is a natural featherweight, and its weight was probably much higher than the featherweight limit when I fought it. He was tall and probably because of that I really felt his power and strength.

RTV: Are you looking forward to gaining weight and competing against stronger and more enduring fighters? Do you feel anxious at the same time?

NEITHER: I guess I’ll feel both. How can I keep my cool when future opponents endure my punching power? Right now, the opponent’s expression changes every time I land a punch, but when I gain weight, they may be able to withstand punches that would normally knock down bantamweights. How do I stay calm when things don’t go my way? I think it’s going to be fun, but it could also be disturbing.

RTV: Is it also an opportunity to show something that you have never shown before?

NEITHER: Yes, maybe I can finally show everything I have then.

RTV: Was the best punch you’ve ever thrown so far the right hand that knocked out Juan Carlos Payano?

NEITHER: In effect. I couldn’t throw a perfect punch like that even in practice. It was a perfect punch, not “almost perfect” or “almost perfect”. They say “perseverance pays”. If you put in the effort and keep trying, I think there might come a time when you even exceed your abilities. It was a punch that I was only able to throw when I was really sharp and had a sense that I don’t usually have. I saw a single light in the ring and just followed it.

RTV: After upgrading to 122, matchmaking might be difficult due to promotion issues. Are you going to assert your wishes to some extent? Or are you going to leave it to the team?

NEITHER: I will say who I would like to fight, what I would like to do but I will leave the choice to my manager and promoter at the end. I’m not going to intervene, the rest is up to them.

RTV: With Amazon Prime entering the boxing business, many big fights are likely to take place in Japan. What do you think of the development?

NEITHER: Amazon Prime values ​​and appreciates boxing. I think it’s a good move for boxing. If the young fighters get to the point where they can make great fights, they can also aim for the kind of scene that awaits them in Japan.

NEITHER: Of course, I still want to fight in America too. It would be great if I could alternately fight in Japan and the United States

RTV: It’s still early to say but do you think your weight limit will be featherweight?

NEITHER: I think so. I have no desire to fight in divisions to which I do not belong. I want to be #1 in the weight class where I can do my best. Manny Pacquiqo is a rare exception. I will not go up to the division, where I will have to make up for a huge physical deficit, where my performance will not meet my expectations.

RTV: It’s hard to imagine you’ll hunt a bigger fighter strictly for a lot of money.

NEITHER: It’s not about the money, it’s about the best performance. I haven’t even trained for featherweight yet, and I can’t think of anything higher than that now.

RTV: What is your ultimate goal as a boxer?

NEITHER: I started boxing at the age of 6, and I want to find a real end to my career. It’s not about how many weight classes I’d like to conquer or anything like that. I don’t want to fight in exhibition matches after I retire. I like to accomplish whatever I want while I’m active. My goal is to create my own legacy, but I can’t think of a specific goal for that right now. I used to say I would retire at 35. However, maybe I could do it a bit longer if I feel like I can still do it.

RTV: You always said you wanted to retire at 35. Have there been any changes in your life plan?

NEITHER: I cannot say with certainty that I will retire at 35. If I get even better as a fighter, I’d like to keep challenging myself. There are a lot of active 35-year-old boxers these days. It will totally depend on my health and performance.

RTV: What do you think you will do after becoming a professional boxer? 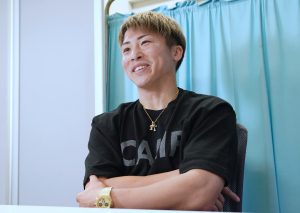 We can look forward to another six years of The Monster in the ring. Beyond that, who knows? Photo by Naoki Fukuda

NEITHER: I don’t know if I would like to stay in boxing or leave this profession completely. If I want to stay, I might be interested in becoming a promoter. I wouldn’t say I would like to become an international promoter, but I think it would be fun to work as a promoter in Japan to increase the popularity of boxing. But, again, only if I wanted to stay in this business. As soon as I retire, I might think boxing is over for me. I might end up doing it to the point of not wanting to get involved anymore (laughs).